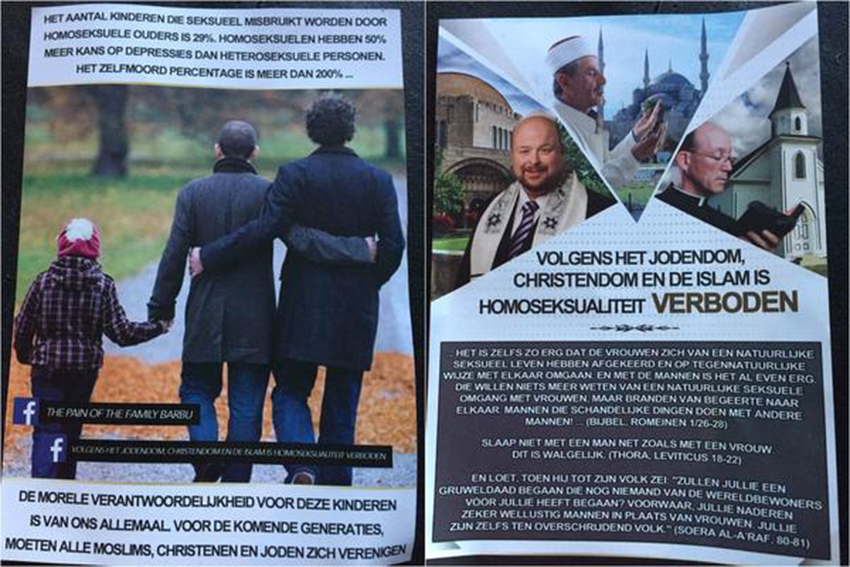 October 19, 2016 37Views 0Likes
[19 October 2016] Raised over rising homophobia in Amsterdam. The group behind the leaflets in Amsterdam calling on all religions to unite to exterminate gay people has appeared to have been identified.
The pamphlets, which were distributed to homes in the western districts of the Netherlands capital, gave rise to at least 75 complaints to the authorities.
‘According to Judaism, Christianity and Islam, homosexuality is forbidden,’ the leaflet reads, before quoting Romans 26-28 that refers to men ‘burned in their lust toward one another’ who received ‘due penalty for the error.
On the other side of the Dutch flyers is a list of incorrect and offensive ‘statistics’.
‘The number of children being sexually abused by homosexual parents is 29%,’ they claim.
‘Homosexuals have a 50% higher chance of depression than heterosexual people. The suicide percentage is more than 200%.’
And below the picture:
‘The moral responsibility for these children is all of ours for the coming generations,’ the flyer says. ‘All Muslims, Christians and Jews must unite.’
Police have identified the supporters of Turkish hate preacher Harun Yahya, according to the Volkskrant.
The Telegraaf newspaper however also suggests it could be linked to Dutch Turkish campaigner Berrak Su, who regularly presents homophobic videos on their Facebook channel.
On Saturday night, two gay men aged 52 and 55 were attacked near Central Station. They were first insulted, and then one was punched to the floor and kicked in the face. While bystanders rushed to help, the perpetrators ran away and have not been caught.
‘It is outrageous that this happens and shows once again that we must continue to work every day in Amsterdam to the acceptance of LHBTI’s,’ Simone Kukenheim, from Alderman Diversity, told Het Parool.
The Netherlands was the first country in the world to legalize same-sex marriage, with the first legal wedding taking place between two men was in Amsterdam in 2001
Source: GAYSTAR NEWS